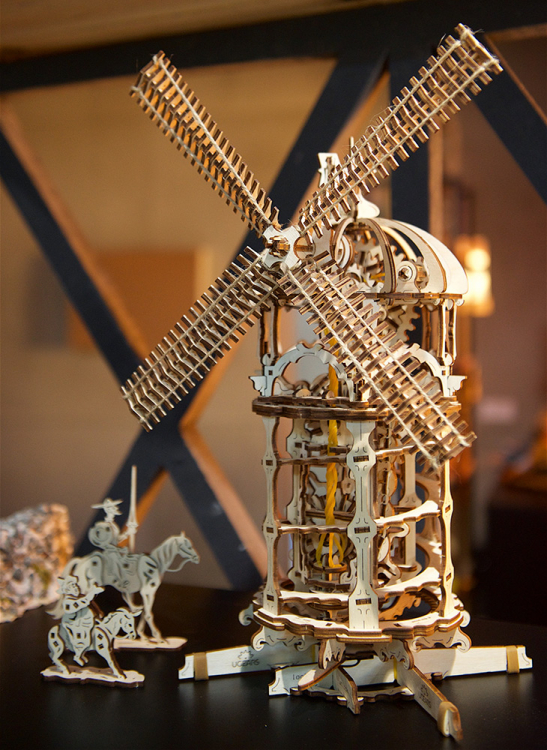 The Tower Windmill from Ugears is more than a mechanical puzzle. It is an exciting adventure into the history of old England. The model is based on the Chesterton Windmill, a 17th-century cylindrical stone tower windmill that was built outside the village of Chesterton, Warwickshire county. Built around 1632-33, the Windmill was restored between 1965 and 1974 and today it is the earliest tower mill in England to retain any of its working parts.

This unique construction with an arched base was presumably built by a prominent figure of the period, Sir Edward Peyto that owned Chesterton Manor at that time.

Sir Edward was an enthusiastic mathematician and astrologer, which brought up the presumption that the tower mill was initially designed to become an observatory. Although there is no evidence to support this theory and we can only guess what had driven the post-medieval nobleman to create this beautiful and unique windmill.

This Ugears model designed in “Victorian steam-punk skeleton” style is based on a prototype from Chesterton.

When spinning rapidly the aerodynamic twist sails create fairly strong wind. It also can work the other way around: blowing air directed at the sails will make them spin. Use a fan to demonstrate to your kids how real windmills operate.

The model is powered by a removable rubber band motor. Once the motor is removed, the Windmill can work in a manual mode that allows you to observe and examine the fascinating complex mechanism in detail.

The rubber band motor drives the sails by means of a screw conveyor (worm feeder) and gear transmission. The design of the gear transmission includes a flexure link, the type of chain drive assembled out of many small links. The full-fledged chain drive made out of plywood has never been used in the Ugears models before.

Resembling a spiral staircase, the rotating base of the arched tower is a part of the screw conveyor mechanism that is a chief part of the model’s mechanism. Fascinating mechanics of the moving gears will captivate your attention for a long time.

While taking origin from the English prototype, the Ugears model also addresses the Spanish classic: the Tower Windmill comes with the figures of the Ingenious Nobleman Don Quixote and his quirky companion Sancho Panza.

The Ugears Tower Windmill model kit is made of sustainably sourced high grade wood and has everything you might need for assembly. The quality of the parts is top-notch: a laser method is used for cutting items from a plywood board that provides precise hairline cuts. The details have to be pulled out of the boards and assembled to create a complete model. Like all other Ugears models, the Tower Windmill comes with step-by-step, full-color, truly easy to follow instructions in 11 languages (English, German, Ukrainian, French, Polish, Spanish, Russian, Turkish, Italian, Chinese and Korean) and requires neither glue nor special tools to be fully assembled into functional working Windmill.